On Monday, June 18, 2018, Blake G. Arata was posthumously awarded the Professional Landmen’s Association of New Orleans (PLANO) Lifetime Achievement Award. PLANO was formed in 1953 to promote and advance the art and science of the professional landman.

Blake dedicated his life to practicing law in the firm he co-founded in 1970 and loved. For over half a century, he was renowned as one of Louisiana’s premier oil and gas attorneys, both in the boardroom and in the courtroom. He was also the consummate title examiner; his opinions rivaled Faberge’s eggs in their elegance. With a surgeon’s precision and an artist’s eye, he crafted opinions that always hit the mark while short, easy to follow and devoid of fluff. 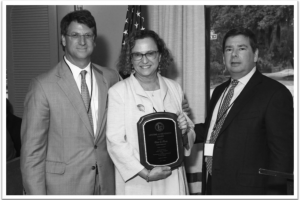